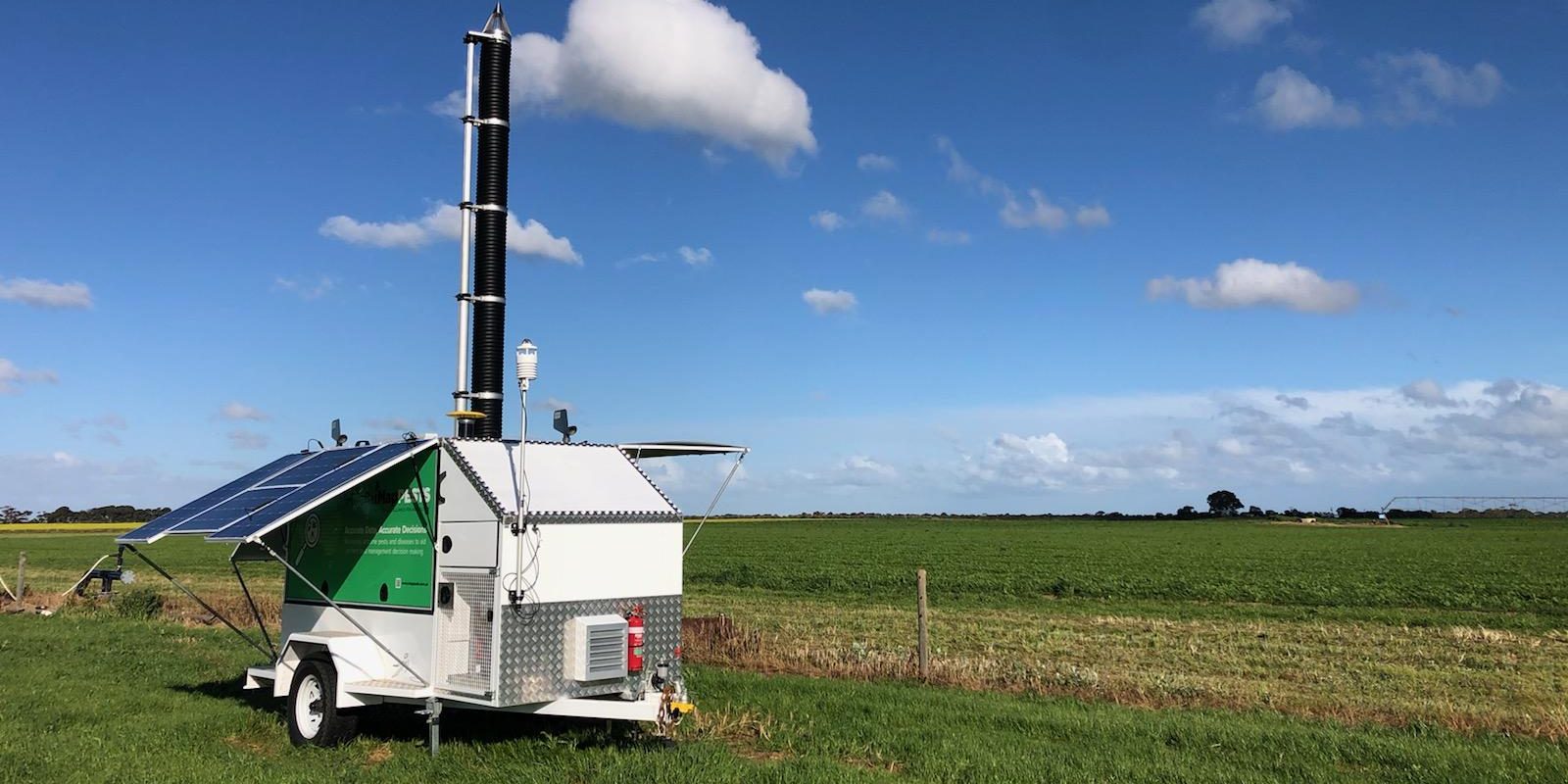 Sentinel 2 was trialled beside a crop of brussels sprouts in Langhorne Creek over the transition from winter to spring. Priority pests […]

Sentinel 2 was trialled beside a crop of brussels sprouts in Langhorne Creek over the transition from winter to spring. Priority pests and pathogens for wine, horticulture & grains were targeted for identification

Aphid catches in the 6m sample are much higher, with very few captured in the 2m sampler, whereas onion thrips are captured more frequently in the 2m sampler. This most likely reflects the differing flight capacity of the insects but may also reflect the variations in design of the traps and their respective drawing power.

Russian wheat aphids were infrequently captured up until the 6th September when a huge spike of >200 winged adults were captured in one day followed by low numbers again. The large spike is most likely made up of RWA that were living on the barley grass weed that is prevalent in parks, roadsides and unmanaged land. This grass matures and dries faster than the crop plants that host RWA, and hence during the first few warm days of spring when the temperature reached around 24°C, the aphids on the barley grass took flight to find “greener pastures”.

Aphids will only take flight when there is very little wind so the very light, warm northerly breezes present on 6th September were perfect conditions for the winged aphids. RWA living on crop grasses (wheat and barley) are less likely to have contributed to this spike since those host plants are still relatively green at that time and the aphids had no incentive to take flight. Previous years indicate that peak RWA flights occur in October and November.

Increased captures of green peach aphids occurred in early September also as a reflection of the warmer drier conditions. Canola plants by now are beginning to lose their leaves and hence the refuge and habitat for GPA is thinning out and aphids are more likely to take to the wing on good “flying days”. Though a much smaller peak (only 25 individuals), this species also peaked on the 6th September but has had several smaller peaks since. These aphids may also have been hosted by the nearby Brussels sprouts crop.

Onion thrips numbers peaked in four periods. Onion thrips are hosted by Brussels sprouts and we suspect that grower activity in the Brussels sprouts field (e.g. regular harvesting throughout August) is likely to have stirred up the thrips and this, combined with warm dry conditions, has resulted in the captures during early August, mid August, end of August and mid September. Some of these peak dates align with the same observed peaks for aphid species. Higher numbers were collected later during the sampling period as would be expected in warmer spring conditions.

Low numbers of DBM, Etiella and Noctuid moths (e.g. budworm moths) were detected from early September (predominantly in the 6m sampler). These moths are better monitored by using lure based traps since detection and identification within suction samples is challenging because moths tend to lose their distinctive features when they are collected in this manner.

We saw some considerable peaks in Botrytis and Sclerotinia spores right around harvest at the end of August. Large rain events early in the season promoted a suitable environment for pathogens to establish infection within a suitable host. As the weather changes from winter to spring, additional rain events followed by long periods of high humidity create the perfect conditions for disease to develop in the crop. The peaks in detection for both Botrytis and Sclerotinia were likely caused by harvest-associated movement and disruption of spores.