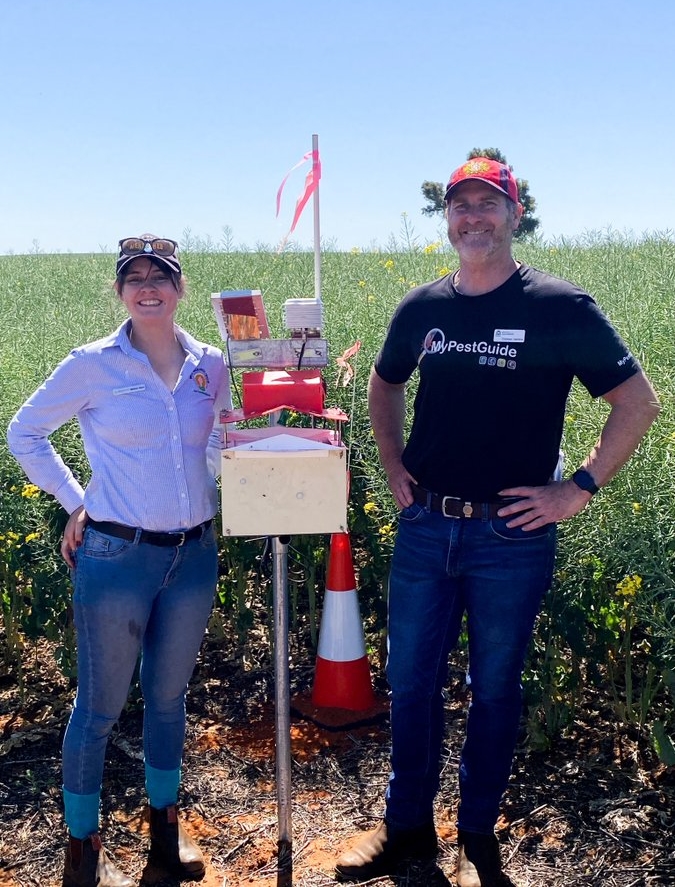 As part of a GRDC project and a national iMapPESTS project led by Hort Innovation, DPIRD staff are working with grower groups to survey summer/autumn brassicas for diamondback moth to predict early-season risk of infestation using the traditional manual traps and new automated traps.

The research aims to provide canola growers with an earlier warning about potential diamondback moth
(DBM) outbreaks, so they can be more proactive in managing the insect pest.

The project uses delta-style traps which use a pheromone and sticky paper to capture moths as the standard Unitraps and smart traps used for budworm are not effective at capturing DBM.

Trapview released their automated wing trap this year, which is shaped similarly to the delta traps and more
suited to capturing DBM. Similar to the Trapview traps we use for budworm, male moths are attracted via a
pheromone and are caught on a sheet of sticky paper. They are then photographed and the images uploaded to a server where they can be viewed.

Traditionally, insect monitoring is a labour-intensive process with weekly checks followed by manual entry
of population data into spreadsheets. Automated traps and sensors can provide real-time surveillance for pests
and diseases while reducing the travel costs associated with checking moth traps.

The project has four Trapview wing traps operating in the field this year at Albany, Merredin, Morawa and
the West Midlands trial site near Badgingarra. Initial results have been mixed. For example, DBM have been
active at both the Morawa and the Badgingarra sites. WMG staff have been capturing moderate numbers.